Electrocution is surprisingly common, although rates of lightening strike are decreasing. Given that they should be well aware of the dangers of electricity, I was surprised that electricians and people who work with electricity are most likely to be affected. Electrocutions could affect people in hospital as well as out of hospital, and as the old adage goes, prevention is better than cure. It's not just high voltage electrocutions that cause problems, as a 33 year old with a domestic electrocution found.

If you look hard enough, you can find plenty of information online about electrocution. The AHA has a very thorough article online and EnlightenMe and LITFL have cases on the injuries associated with electrocution.
I know it's not FOAM, but the eLfH e-learning site has a fantastic e-learning module about electrical burns. It tells you a lot about those things that you always wondered about, but weren't quite sure about, and I'd really recommend completing it if you can.

So, lets get started.

Electrocution: death as a result of exposure to electric current

1000 people per year are estimated to die from exposure to electricity each year. In 2005, there were 11 work related electrocutions and 119 serious injuries in the workplace. Electrical injuries follow a bimodal age distribution pattern - children younger than six, and in early adulthood.


The ability of an electrical current to cause morbidity and mortality is dependent on six different factors:
- Magnitude of the current
- Voltage of the electrical source
- Resistance of tissue types involved - (bone has the most resistance)
- Duration of exposure
- Type of current
- Current pathway

There are two main types of electricity that might cause us injury - low tension and high tension.

High Tension
This type of electricity simultaneously depolarises the entire myocardium. This normally stops the heart completely, but sometimes the heart sorts itself out again and starts working normally again (it has intrinsic cardiac automaticity). This type of electricity also causes thoracic muscle spasm making it very difficult to breathe. Secondary hypoxic cardiac arreast is likely! Victims are most likely to die if they experience immediate respiratory or cardiac arrest and no treatment is provided - if treatment is provided at scene, results are often good.
DC exposure is single, and often throws the victim away. A direct strike is uncommon, and often splashes sideways from an object or a victim may be holding on to a struck object.

Treatment
The management of burns is important - we'll cover this later! 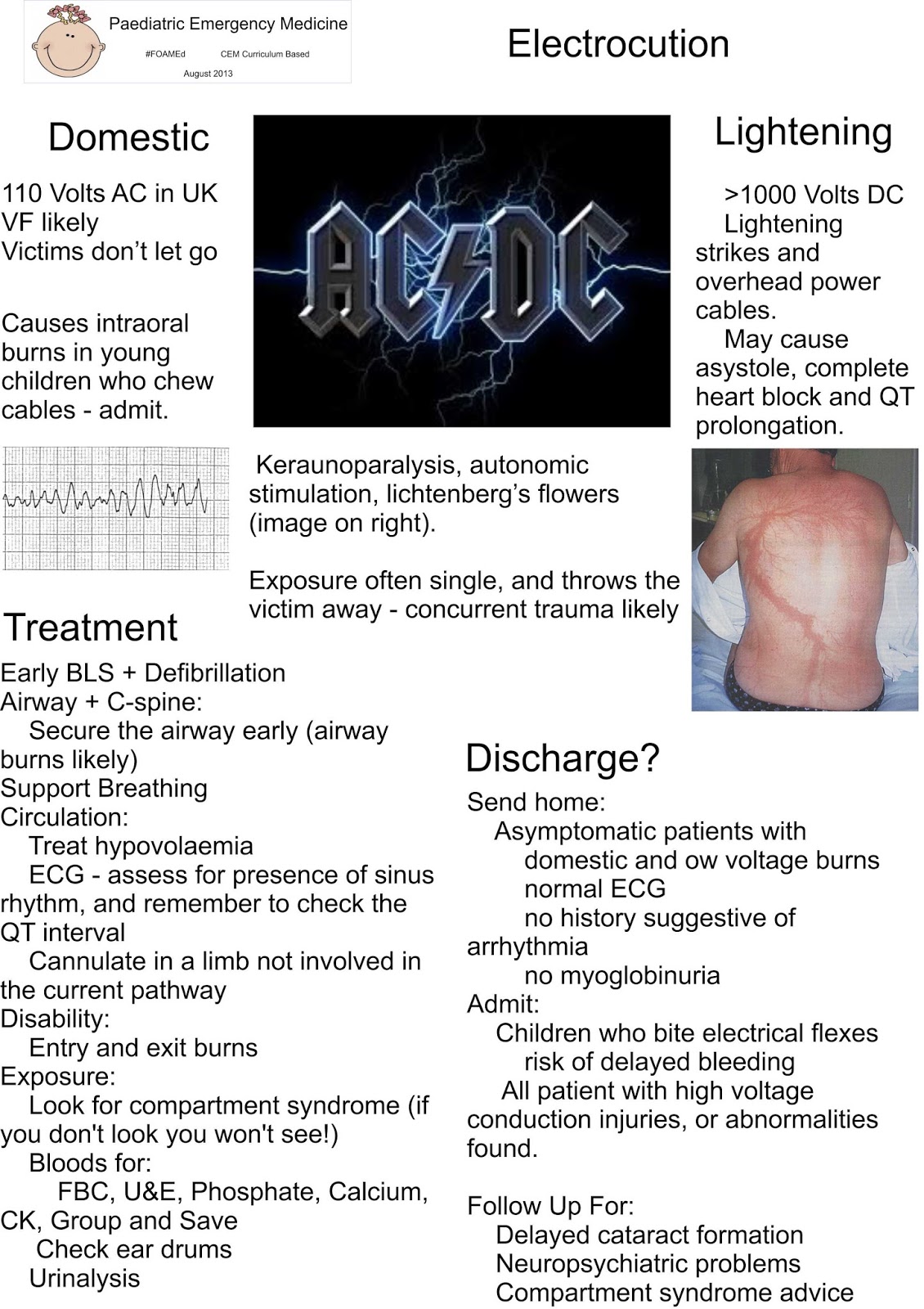 Posted by Cheerful Elephant at 15:47