Most people learn by doing, whether their "doing" is simulation, or real life. Given the thankful infrequency of paediatric arrests, we must rely on simulation. I would strongly recommend you practice paediatric resuscitation simulations, making them as realistic as possible, to supplement your theoretical knowledge. I've heard that one children's hospital runs a mock paediatric arrest weekly, and it is very helpful.

Course wise, either APLS or EPLS is accepted. Most people I've spoken to prefer the APLS course as they syllabus is broader. I've not done both of them so I can't comment, but I enjoyed my course.

Issues
This blog has a look at what goes wrong in a paediatric arrest. With a link to a formal study, they conclude that "issues regarding equipment familiarity/use/misuse, failure to check BSL, and drug errors. Calculations of drug doses were difficult under stress. Failure rates in some of these domains exceeded 50%.

Drug dosing is difficult. Multiple smart phone apps exist - I like PalmPedi, despite the American-ness (if you buy PalmPedi consider getting PalmEM - reviewed on LITFL instead, as PalmED encorporates PalmPedi). This Australian website is nice and clear. We'll blog about drugs later.

Word of mouth suggests that "WET FAG" is no longer used as an acronym, and "WET FLAG" is more common instead. I do try and memorise all of these doses, but do like to be able to swiftly check them. I do not trust my phone to have signal or battery, and other Clinicians are often busy - so I rely on paper versions instead.

Parents - in or out?  In my experience they want to be in, and it is useful to have someone explaining things to them. They don't alter efficacy of the resuscitation effort.

And debriefing afterwards is good, even if the resus is successful. Remember to carefully document - especially as you may have caused rib fractures, which may be later attributed to non accidental injury.

The Algorithm
Apart from doses, the algorithm is pretty much the same as for adults with a few key differences:
- Start with 5 initial rescue breaths
- CPR ratio 15:2

There are plenty of similarities:
- No atropine unless bradycardic
- Sodium bicarbonate only recommended if prolonged arrest, or associated with hyperkalaemia or TCA overdose
- Continuous compressions encouraged.
- After ROSC, titrate oxygen to saturations 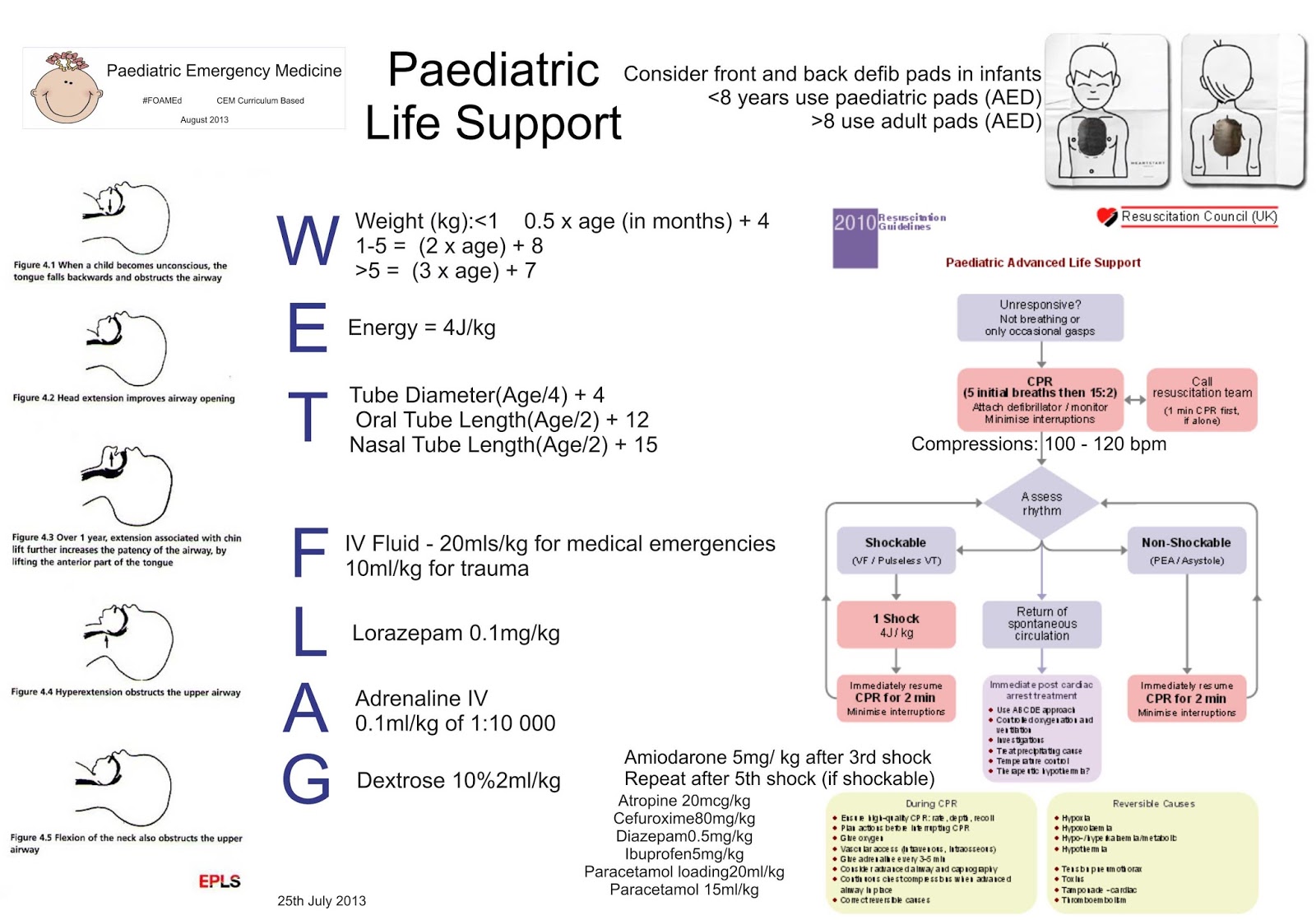 Posted by Cheerful Elephant at 15:27